Justice of the Peace
(Midland) 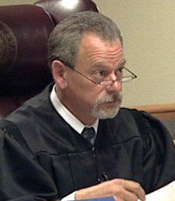 Judge Cobos is a native Texan and was born and raised in Fabens, Texas (El Paso County). He graduated from Hardin-Simmons University, Abilene, Texas in 1979 with a Bachelor of Music Education. Prior to becoming Justice of the Peace, Mr. Cobos worked for the Midland County Sheriff’s Dept. from 1979 through 1987. Judge Cobos worked as a Jailer, Patrol Officer and Major Crimes Investigator. In 1984 Cobos implemented the Midland Crime Stoppers Program.

In 1997 Cobos was appointed by the Midland County Commissioner’s Court to fill the unexpired term of Judge Robert H. Pine. Judge Cobos has run unopposed in all elections since his initial appointment in 1997 for Midland County Justice of the Peace, Pct. 2.

Judge Cobos also implemented the award winning Justice Court Alternative Sentencing Program/Teen Leadership Program in 1998 designed to divert juvenile offenders from the criminal justice system and impact the dropout rate in Midland. In 2002 the Program received the Texas Association of Counties Best Practices Innovation Award and in 2007 the Program received the JPCA Best Practices Award. In December of 2008 the Program was featured on ABC World News Tonight