Back to Sabine River Authority of Texas 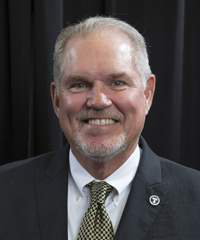 David Montagne, reappointed to the Board of Regents in 2015, is executive vice president & general manager for the Sabine River Authority of Texas, for which he has worked since 1986. He is responsible for the overall operations of the Sabine River Authority, which include reservoir operations at Toledo Bend, Lake Fork and Lake Tawakoni, as well as canal operations at Gulf Coast Canal System. He executes the policy and program directives of the Board of Directors, oversees the budget, and serves as the liaison between SRA and the Legislature, as well as other governmental agencies. He also represents the interests of Texas as project administrator for Toledo Bend Project Joint Operation.

Montagne has been with the Authority for more than 27 years, previously holding the positions of assistant general manager, controller and general office manager. He is very active in statewide water resource planning efforts. He was appointed as a board member of the Texas Water Conservation Association’s (TWCA) Risk Management Fund Board of Trustees and is also a member of the TWCA Reuse Water Committee. From 2004 until 2009, he served as a Texas Ethics Commissioner. In 2009, Mr. Montagne was appointed to the Texas State University System Board of Regents by Governor Rick Perry and in 2015 was reappointed for a six year term by Governor Greg Abbott.

Born and raised in Orange County, David Montagne is a graduate of Lamar University in Beaumont with a BBA in Accounting. His wife, Janet, is the CEO of Texas Healthcare Management and River City Hospice. David and Janet have four children and five grandchildren and reside in Beaumont, Texas. His term on the Board of Regents expires in 2021.