Back to Governor's Commission for Women 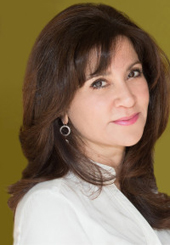 Jinous Rouhani of Austin is the CEO of Austin Area Obstetrics, Gynecology, and Fertility. Previously, she served as CEO of Medexecs and as CAO for Texas Cardiovascular Consultants. Jinous also served as the Secretary, Vice President, and President of Central Texas Chapter of the Medical Group Management Association where she has been a national member for over 25 years. She also serves on the St. David’s Healthcare Foundation’s Toast of the Town Committee, as well as serving as a host and mentor to healthcare scholars. Additionally, Rouhani serves as a mentor for the Young Women’s Alliance. Rouhani previously served as an advisor to the Austin Children’s Shelter and the organization Aware, Awake, Alive. She has also served with the Children of Haiti support team. Rouhani received a Bachelor of Science in Computer Science and Mathematics and a Master of Business Administration from St. Edward’s University.