Back to Secretary of State 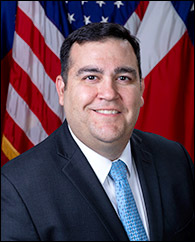 Jose A. "Joe" Esparza was sworn in as Texas Deputy Secretary of State on December 14, 2018. Esparza previously served as a Senior Appointments Manager in the office of the Governor, overseeing numerous gubernatorial appointments during Governor Abbott's first term.

A graduate of Texas Tech University, Esparza earned a Bachelor of Arts in Agricultural Communications. Esparza received an Honorable Discharge from the United States Marine Corps and is a Veteran of the Global War on Terrorism, having served in Iraq.